When the term data leak comes to mind, most enterprises think of the dark web. Although compromised information can damage an organization when distributed through gated and anonymous platforms, we are seeing social channels being used to allow for a more rapid and potentially destructive outcome. These platforms have an overwhelming number of global participants, with almost half of the world’s population using some form of social media. Threat actors are aware of the massive audience this allows them to reach and as such, are using these channels to promote and expose confidential data.
As of 2019 the potential for an enterprise to experience a breach in the next two years has increased by 27.9%. That, combined with the potential for data leaks occurring with the intent to expose an organization or because of human error, mean that organizations are increasingly susceptible to some form of sensitive data loss. While the odds are growing that information will be leaked, using a social platform to leak it will only increase the chance that it will be seen, abused, and remain exposed online longer than it has in the past.
The damage to an organization experiencing a data leak on social media can manifest in various ways. Regardless of the nature of what is leaked, as well as the extent, the bad publicity surrounding the event can have a long-lasting impact. Without a solid reputation that customers feel they can trust, loss of business and a decline in profit is inevitable.
Direct expenses associated with the breach can also wreak havoc on an organization. Legal consultation, investigation into the source of the exposed content, and proactive actions to smooth public relations are all means of damage control that are necessary as well as costly. 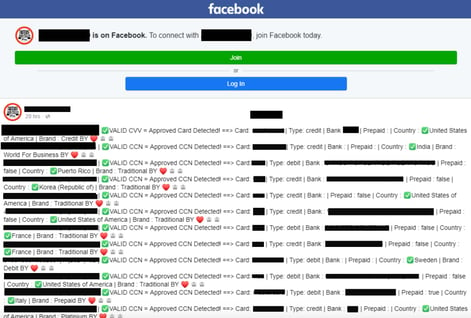 The example above is a Facebook post exposing credit card information for individuals belonging to a global financial institution. Although threat actors have traditionally used paste sites and the dark web to advertise stolen account data, we are now seeing social sites such as Facebook being used in similar fashion.

The second example uses Twitter to expose an internal document for a global investment firm. Sensitive content published on this particular platform has the potential to go viral quickly and be exposed to any of its 330 million+ user base simply by retweeting. The repercussions of an incident like this can be severe.
Social media has transformed the way we communicate by allowing information to be shared instantly with huge audiences. Threat actors are using social media as another way to leak sensitive information and documents. Enterprises should actively monitor social media and have procedures in place to mitigate risk when sensitive data is leaked.
Additional Resources: